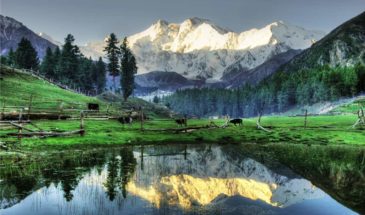 Fairy meadows, so named because of local superstition that fairies inhabit this spectacularly forested alpine meadow, is a wonderful setting from where to explore Nanga Parbat. One will drive from Gilgit to Fairy Point, and from there walk a few…

Fairy meadows, so named because of local superstition that fairies inhabit this spectacularly forested alpine meadow, is a wonderful setting from where to explore Nanga Parbat. One will drive from Gilgit to Fairy Point, and from there walk a few hours to fairy meadows. Shepherd’s huts are scattered around the area, and clear water is plentiful coupled with the pine forests and the looming north face of Nanga Parbat, one can readily believe that fairies really do live in this alpine meadow. The next day’s trek will lead to the base camp of this trek, Beyal, from where day excursions will be made to the German memorial to those killed in the 1937 expedition, and to the foot of Jiliper peak. On the return, stop for the night at fairy meadows, before trekking to the road head and driving back to Gilgit. Then we go to Hunza to visit the forts of Altit and Baltit and off course to see some beautiful peaks over 7000m.

Welcome to Pakistan, one of representative from Karakorum Adventure will receive you at Islamabad International Airport and transfer to hotel.

Today, we will make a city sightseeing tour of Rawalpindi and Islamabad, which offers a great contrast of culture, archaeology and planning. Rawalpindi is an old city with narrow lanes and bustling bazaars while Islamabad is a modern and the only planned city of Pakistan serving as the capital of the state. Raja Bazaar, Murree Road, Pakistan Monument and Shah Faisal Mosque are the places of tourist interest included in the tour.

Early morning we will drive to Besham, en-route we will visit the Taxila Museum, Gurdwara Panja Sahib at Hasan Abdal and Ashoka Rocks in Mansehra.Taxila Museum is located 35 km from Islamabad on the Grand Trunk Road to Peshawar. It is famous for remains of Gandhara art. Most of the sites at Taxila, dating back 600 BCE to 500CE, are located around the Taxila Museum. There are 4000 objects displayed, including stone, stucco, terracotta, silver, gold, iron and semiprecious stones. Mainly the display consists of objects from the period 600 B.C to 500 AD. Buddhist, Hindu and Jain cultures are well represented through these objects discovered from three ancient cities and more than two dozen Buddhist Stupas and Monasteries and Greek temples. Hasan Abdal is 48 km from Rawalpindi. It is a beautiful, quiet place and a convenient halting point of G.T. Road enroute to Peshawar or Abbottabad. This town has a particular association with Mughals and Sikhs. It was mentioned by Emperor Jahangir in his memoirs and frequently visited by successive Mughal Kings, on their way to Kashmir. It remained a holy place for various religious groups through the ages. It has a Sikh Gurdwara (temple) known as Panja Sahib having a sacred rock with the handprint of their religious leader, Guru Nanak. Twice a year, Sikh pilgrims visit this Gurdwara from all from all over the world.On the north side of town is Mansehra's tourist attraction, three granite boulders on which 14 edicts were engraved by order of the Mauryan king Ashoka in the 3rd century BC. Appalled by the destruction wreaked by his military campaigns, Ashoka converted to Buddhism and tried to dictate a new morality based on piety, moderation, tolerance and respect for life. He was greatly revered, but his reforms (and his empire) didn't last much longer than he did.The inscriptions have done better, but they too are fading away; despite the shelters, the ancient Karoshthi script is now almost impossible to see. The rocks uphill are better than the one below the road. Overnight at Hotel.

There are no reviews yet.

Explore the best tour of your life with us.

Travel may be local, regional, national (domestic) or international. In some countries, non-local internal travel may require an internal passport.